Once again, I’m at one of my favorite spots in the world, Dobra Tea. Not as a tourist this time, however–as a resident of Asheville! That’s right, I’ve managed to not only not move back home, but to move to one of my favorite cities ever, by way of the AmeriCorps VISTA program. Here’s to a year full of civil service, writing, and my favorite tea right next door.

Like last week’s post comparing my literary spider webs (Two Years Eight Months and Twenty-Eight Nights to Good Omens), I just read a fantastic book and it spiraled into some interesting connections.

Half World by Hiromi Goto follows the story of Melanie Tamaki, the first living child born to no-living parents in the Half World, the resting point between Flesh World and Spirit World. Her mother kidnapped by a gruesome villain called Mr. Glueskin, Melanie journeys into Half World to rescue her mother and put the cycle of the three worlds to rights. From page one this book hit just about everything I could ever want in a book: a gruesome and alien other world, wonderful supporting characters (Ms. Wei!) hints of mythology, casual queer inclusivity, a protag who’s moody and stubborn and goes when destiny says go (or, in this case, when Mr. Glueskin does). I read it in a matter of hours. Wow, what a good book.

However, this is not a book review. It is a mapping of where the book took me, which is to The Tiger’s Apprentice by Laurence Yep.

This book was one of my favorites growing up, and probably still is. Half World evoked some strong mental sense-memories for me of Yep’s book, which is about a Chinese-American boy discovering he is from a line of magical guardians. Do not get me wrong! Half World is by a Japanese author and recalls Japanese mythology, and I am not equating the two. But nevertheless something about Half World reminded me strongly of the worldbuilding in The Tiger’s Apprentice. For some reason, I think one aspect of it was the sensory focus on smells, especially horrible ones. I have no clue why such a thing stood out to me.

My second piece of evidence (despite not having read The Tiger’s Apprentice in a very long time) is the sheer grotesqueness of the monsters each protagonist faces. Mr. Glueskin’s skin is melting rubber, he suffocates people in his gigantic tongue and swallows them whole, he unhinges his jaw until it hangs on the floor. In The Tiger’s Apprentice, by far the most frightening creature is The Watcher, a creature of many heads whose hair suffocates and almost kills Tom, the protagonist.

Half World was the perfect book for me to read right now, as I’m worldbuilding and plotting a novel that takes place in a goblin realm, a truly bizarre and monstrous setting. I’ll try to let Goto and Yep’s talent with creating casual monstrosities influence my own writing. 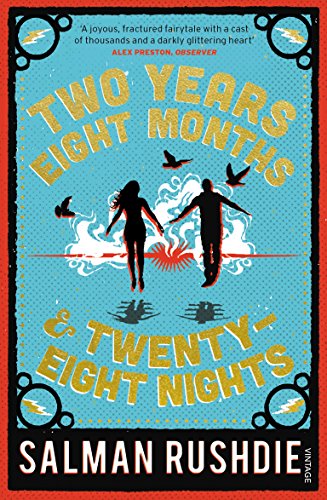 I just read Two Years Eight Months and Twenty-Eight Nights by Salman Rushdie, almost entirely in airports. What a wonderful book full of wonderful characters: the myriad descendants of a jinnia princess named Skyfairy and a long-dead philosopher. Over the course of 1,001 nights (which is, of course, another way to say the title of the book), these descendants watch the world fall apart and help put it back together in a supernatural clash between jinn.

My favorite elements of this story were the weaving together of each character’s narrative, immortal and mortal, up to the climax of the story. Another fantastic element was the philosophical battle between (eventually) long-dead Ibn Rushd (Averroes) and his even-longer-dead rival Al-Ghazali, which the book takes up as well, narrated by a generation of humans reflecting on this philosophic and material cataclysm. The book itself reflects their debate (continued post-mortem) between reason and faith.

This post is not a review, however (though you should go pick up a copy). Rather, it’s a discussion of the unexpected parallels to one of my favorite books in the world, Good Omens, by Neil Gaiman and Terry Pratchett, in which an angel and a demon try to stop the apocalypse. Once I started noticing the parallels I could not stop. Each element I mentioned above is also what makes Good Omens such a beloved book to me. It is a tapestry of characters, all narratives culminating in the eventual cooperative world-saving. The book (though quite a bit more ironic than Rushdie’s), ends with a conclusion about the nature of humanity in relation to god. Furthermore, they are both based in myth, and they are both (nearly) apocalyptic narratives. There are even unique ways of getting from point A to point B in a very short amount of time utilized by supernatural creatures. I could go on. 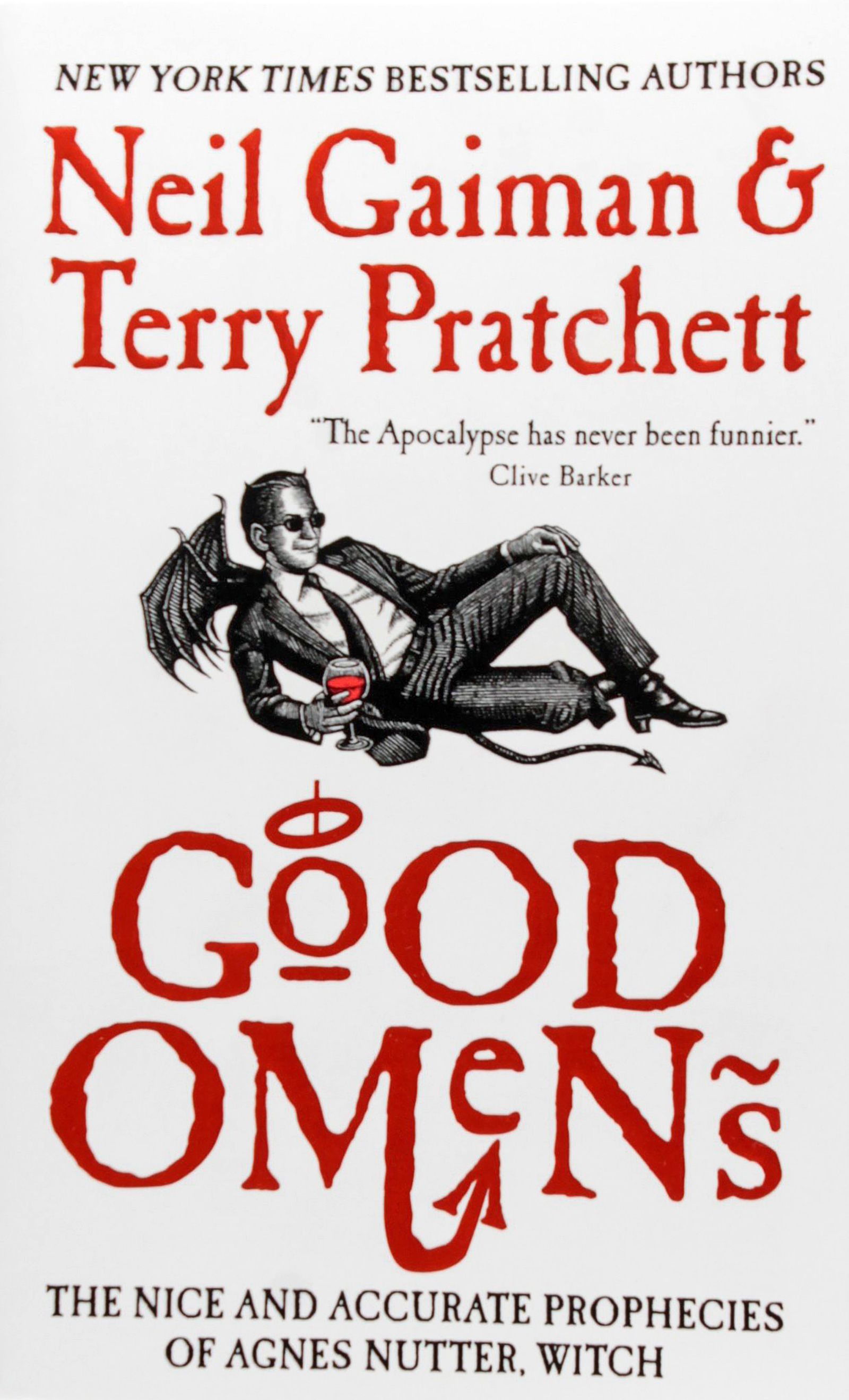 Of course, these books are not equivalent. In fact, in order to get an idea of their differences, you should probably go and read them.

So…I accidentally skipped a week of posting for, I believe, the first time ever. Sorry about that ¯\_(ツ)_/¯. Things got, and remain, a little out of control.

In other news, I have just finished a most wonderful book! The Long Way to a Small, Angry Planet by Becky Chambers.

What a book! The moment I finished it I hopped on Goodreads, gave it 5 stars, and marked it as a favorite. I am psyched to read the next one, A Closed and Common Orbit.

This was the first book that I’ve ever read on the Kindle app. I can’t say I enjoyed the experience. It was handy to have the book constantly with me, but the screen just doesn’t fit enough words to make me feel like I’m making progress, which is why it took me an oddly long time to finish the book.

The Long Way follows the small crew of a ship that punches wormholes through space. It rotates POV quite often, and for once it didn’t bother me unduly. There wasn’t much about this book that I didn’t love, and I shall use a handy tool known as listing to highlight my favorite aspects.

The Long Way to a Small, Angry Planet feels different from other sci-fi. The tone is lighthearted: it’s a book that’s serious, but doesn’t take itself too seriously. I can’t pinpoint the exact type of book or tone I feel like it is, but I can only hope it’s the start of something great.

I’m back from Ecuador! Man, it seems like it was just last year that I was getting back from Ecuador…oh wait, it was. It is 10 pm in the Quito airport as I write this, waiting for my 11:30 pm flight, to take me to my 14 hour layover in Fort Lauderdale (where my research partner and I will be spending a lovely beach day), then on to my 10 pm flight to North Carolina, preceding a 4 hour drive to my apartment, where I will rest for two days then drive 6 hours to visit my family in Tennessee.

Here’s a brief overview of my time in Ecuador:

Things I read in Ecuador: The Foxhole Court series in a three/four day binge (I don’t remember the exact dates, it’s all a little blurry). I have a lot of thoughts, positives and negatives, but that’s another post.

Things I wrote in Ecuador: A series bilingual English lessons (in Kichwa and Spanish). Translations of ten-ish English children’s books into Spanish, written in Sharpie in the margins.

Things I made in Ecuador: A language lab, complete with glass windows, a fresh coat of paint, an installed projector and computer, a small bilingual “library,”  English lessons, lesson user guides, and a lot of blood, sweat, tears, and miracles. It’s our baby.

It was honestly a miracle to complete in 30 days. More unpacking to come, when I’m less exhausted beyond all reasoning.

The blog of Evangeline Giaconia, purveyor of stories, myths, and miscellaneous wonders.

YA fiction/fantasy, art, and thoughts about the writing process.